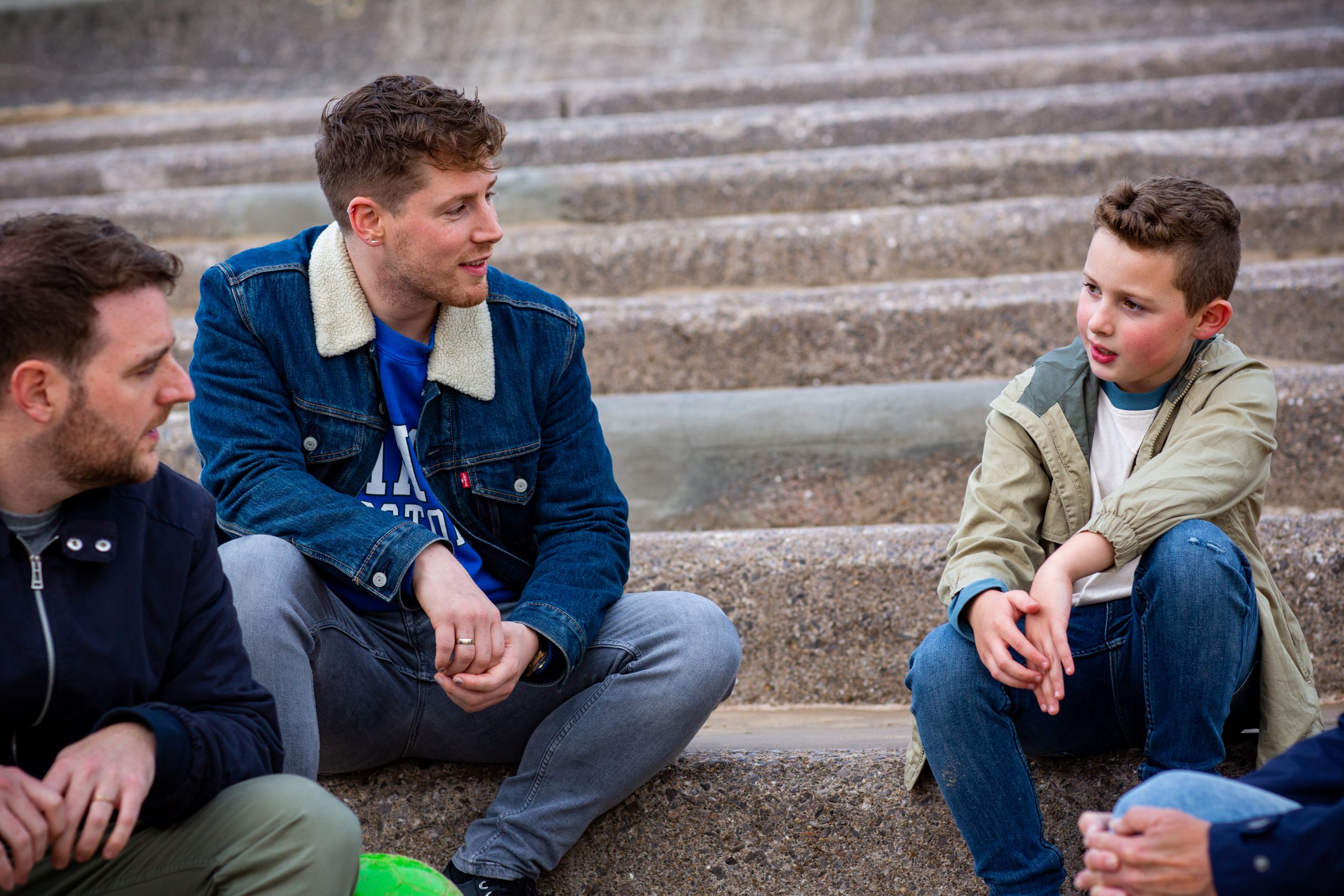 At Foster Wales Blaenau Gwent we are proud to support our LGBTQ+ foster carers and would love to encourage more same sex-couples to foster a child or young person.

There are often myths around same-sex foster couples but we are here to reassure you that your sexuality will never stop you from becoming foster carers – what matters the most is your passion and determination to transform the life of a child.

So we’ve spoken to our successful same sex foster carers ‘Matt and Arron’, who wanted to share their story with others who are of the LGBTQ+ community and are thinking of fostering with their local authority.

My husband and I talked about fostering for a while before we applied. Not only were we nervous with being a same-sex couple, but also being men and would we be accepted in the fostering community, as the stigma on a child needing a female touch with a more nurturing, maternal aspect deemed a better choice. Little did I know that this would not be the case.

We made our first contact with Blaenau Gwent social services and expressed our interest for more information. A friendly social worker came to our house and made us feel at ease. She answered all our concerns and questions. The social worker explained to us that same-sex foster carers were more common than we thought and also there were single male foster carers. We ended the visit on such a high and decided to go ahead with the application. Fast forward five years we have fostered 14 children from all different backgrounds and needs. The journey has not been an easy one and there have been highs and lows.

Some of the lows have been, having a girl foster child and knowing what to expect with girls’ puberty, being two men, our fears became a reality, what happens? How can we support with this aspect? Lucky for us we had an amazing support network of family and friends, but also our own social worker was always on hand to give support and advice. After the first year we became experts on the matter. When we started, myself and my husband were very young and had no children of our own. We were always questioning if what we were doing was right and were we enough for these children. By having regular meetings with our social worker and having her to hand if we needed formed a safety net for us and we soon realized that this is a normal feeling for a parent to have.

The highs and positives of fostering are the bonds you develop with these children, it is hard saying goodbye and watching them leave but knowing you have given them a fighting chance and that they are going on to either live with family or new families is the best feeling in the world, it’s a feeling of accomplishment and a sense of purpose. Through the years every child we had became family and we have kept in contact with most of the children that have left us for pastures new.

So, our worries were not reality. We were enough and being a man doesn’t matter as these children need anyone who has a caring and nurturing personality. In a very female run industry, we need more foster dads as dads play just as an important role in bringing up and giving these children a loving home.

Stories From Our Carers

the story of Tracy and Robert

the story of Stacey

the story of Shirley

We use cookies on our website to give you the most relevant experience by remembering your preferences and repeat visits. By clicking “Accept All”, you consent to the use of ALL the cookies. However, you may visit "Cookie Settings" to provide a controlled consent.
cookie settingsaccept all
manage consent

This website uses cookies to improve your experience while you navigate through the website. Out of these, the cookies that are categorized as necessary are stored on your browser as they are essential for the working of basic functionalities of the website. We also use third-party cookies that help us analyse and understand how you use this website. These cookies will be stored in your browser only with your consent. You also have the option to opt-out of these cookies. But opting out of some of these cookies may affect your browsing experience.
Necessary Always Enabled
Necessary cookies are absolutely essential for the website to function properly. These cookies ensure basic functionalities and security features of the website, anonymously.
Functional
Functional cookies help to perform certain functionalities like sharing the content of the website on social media platforms, collect feedbacks, and other third-party features.
Performance
Performance cookies are used to understand and analyze the key performance indexes of the website which helps in delivering a better user experience for the visitors.
Analytics
Analytical cookies are used to understand how visitors interact with the website. These cookies help provide information on metrics the number of visitors, bounce rate, traffic source, etc.
Advertisement
Advertisement cookies are used to provide visitors with relevant ads and marketing campaigns. These cookies track visitors across websites and collect information to provide customized ads.
Others
Other uncategorized cookies are those that are being analyzed and have not been classified into a category as yet.
SAVE & ACCEPT
Powered by